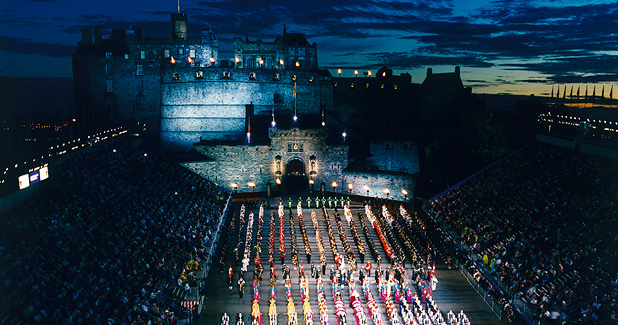 The Edinburgh Military Tattoo displays the musical talent of the British Armed Forces, Commonwealth and International military bands and display teams on the ramparts of Edinburgh Castle. It takes place every evening throughout August, come rain or shine. The Tattoo was born in 1950 and is now high on most visitors' lists - so high, in fact, that it sells out every year.

Though it famously features kilted pipers from regiments of the Scottish Division, it has long been established as an international affair: the first foreign band to take part was the Royal Netherlands Grenadiers in 1952. Since then, it has hosted pipe bands from across the globe and even African tribes. It is broadcast annually on a host of different TV channels, including the BBC, and has an estimated total audience of 100 million.